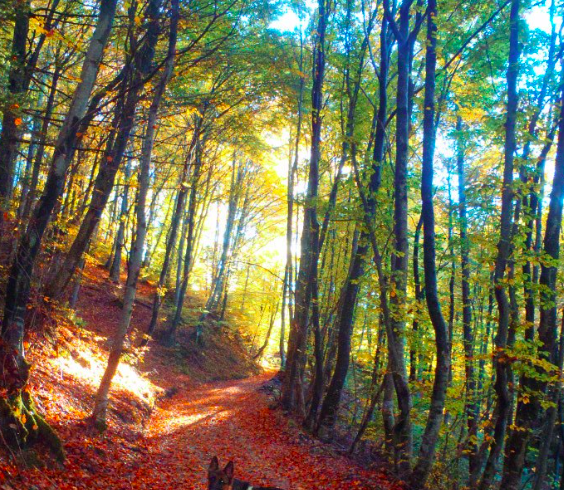 As part of my Global Change Ecology class, I was asked to talk about some ecological changes in my home town.

The first thing it came to mind it was, of course, the big forest located just behind my house. 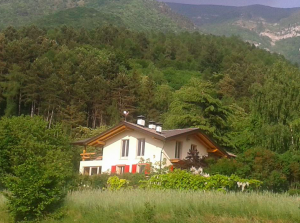 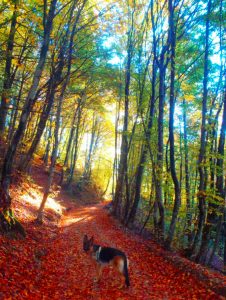 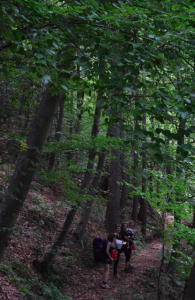 It is my favorite place to go for a morning or evening hike with Zoe, the landscape is wonderful, the colors of the different trees and the light filtering between the leaves makes such a colorful mosaic that changes with every season and renergy me even in the shortest walks.
But it has not always been this way. 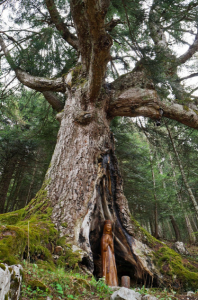 If you look carefully, you will notice that the trees are still young. Only 60 years ago, this whole mountains was dedicated to agriculture, grazing (mainly goats and sheeps), plantation such as chestnuts. Only the silver fir in Bora dei Carboneri („the tree of the coal makers“), about 3 hours hike from home, with its 250 years, is o
ne of the monumental trees in Trentino, standing like and old grandpa overlooking over the forest.

Today, there are still few signs that indicate this past, but they will mostly remain unnoticed unless you look with attention…

In many places you can still see standing rockwalls built to terrace this area and favour agriculture. The rockwalls are now abandoned, in part destroyed by the roots of the plants that now grow unundisturbed anywhere. Some centenary chestnuts also still survive, reminders of an old production, all around the field to Malga Pian (35 minutes hike from home). 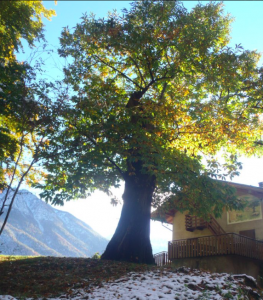 (Malga Pian with the centenary chestnut tree, and “Breakfast at Malga Pian”, July 2016)

Also along the forest roads, there are some plants of mulberry. Its leaves were collected to feed the silkworms that many families kept as a little extra source of income. 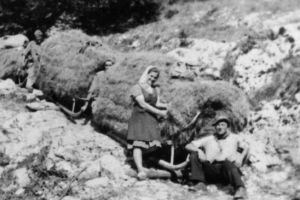 The big stone road that runs uphill just before the Truffula Tree was an important path that men and woman took everyday during the haymaking season. The hay was cultivated up high in the mountain, and taken into the valley through this road. Impressed in the rocks, it is still possible to see the marks that the big sleds loading with hay left.

(from Restrospettive, 2016 -it is a local newspaper looking at the history of the valley)

Also along the forest roads, there are some plants of mulberry. Its leaves were collected to feed the silkworms that many families kept as a little extra source of income. 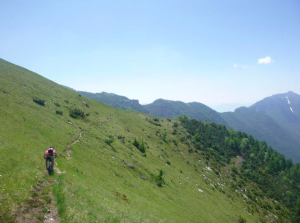 (the big “gardens” on top of the mountain).

You can easily imagine how different the area looked like.

Then…. The World War II ended.

The hay was now cut and transported with tractors on the new road from Mt. Bondone.

Irrigation favoured the coltivation of fruits (grapes and apples mainly in our valley).

Some people moved into the cities, or emigrated away (big migration to America).

People slowly abandoned the land behind my house, and slowly the forest regain ist strenght.

Wild animals came back: the deers, the foxes (we also a regular one too… around 10:00 pm most night on the road in front of the house), birds, insects… (meet our wild neighbours here!)

Bears, which have been hunted almost to extinsion (only 5 individual were left in the Brenta Dolomites in 1990)  are now also slowing recolonizing the habitat. 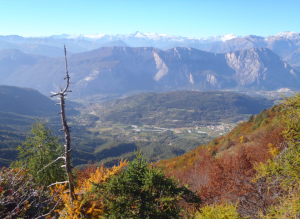 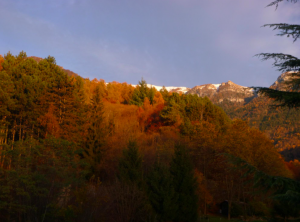 (some fall view of the forest… The Truffula Tree is located just behind this dry tree!)

The man, which for hundreds of years has been the greatest modifier of this land, now left his place to mother nature that is slowly regaining its presence. First the trees, then the animals, the climate also changes…

oh… how much I love those trees behind my house that protect me from the cold downhill wind that every evening originates from the top of the mountains… And how much I am grateful for their services, flowing down the fall of water and snow that could hit my house (you may have noticed we are at the base of an alluvional fan).

I love the forest as it is now. I am proud it is so healthy that it can host even great carnivores (so it is called, but fear not, he love ants…) such as the bears. 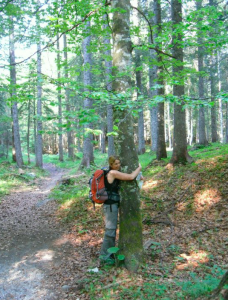 Some people think about it differently. They prefer a more sterile controlled environment. They feel safer in it. I feel safer in this forest than in a city, but it is all about perspectived I guess.

But I care about it, and for this reason I am happy to share this story with you….

PS: there is actually more… the forest behind the house is a private property owned by an association of families in Vigo since the XII century, called the „Vicinia Donego“.

Hike to Malga Pian to read the last names of the people that are in it, and learn more about this story on their panel… One day I will tell you this story too but now I have to go back to my homework…

By continuing to use the site, you agree to the use of cookies. more information